THE MEDITERRANEAN TRILOGY IN CATALONIA I: WINE, OLIVE OIL AND CEREALS. 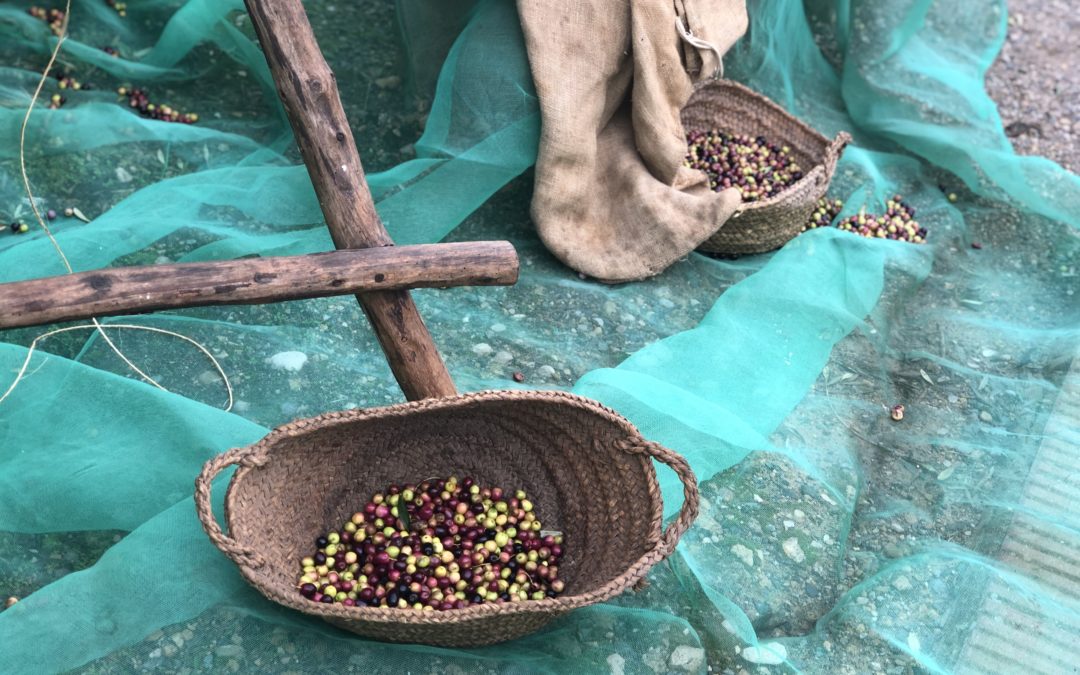 OLIVE OIL AND WINE IN THE PRIORAT

The Mediterranean trilogy is currently very popular and widespread throughout the world. We are fortunate that for centuries in this country this agricultural and food tradition has been our alimentary base and that our Mediterranean climate helps to bear better fruit in our fields. Places like the Priorat are privileged because this region with less than 10,000 inhabitants cultivates excellent products and two of them are part of this trilogy. These two products are wine and olive oil, highly rated and appreciated both nationally and statewide. The Priorat DOQ (Qualified Demonination of Origin) -for wine-, only has one other DOQ to compete with in Spain; the Rioja DOQ. The DOP Oli Siurana (Demonination of Origin Protected Oil) -for olive oil- has more competitors but the olive variety grown here is one of the most appreciated for its light and fruity taste; arbequina – the Catalan olive for antonomasia.

Until recently it was believed that the Greeks introduced wine into Catalonia through their first colony, Emporion (VI century B.C.). However it seems that, thanks to the latest archeological evidence, the Iberians were responsible for the first wine production in our land. It is quite certain that what the Greeks did was fine-tune the production techniques of the natives. Later, the Romans, when they arrived (III century BC) and especially when they dominated the Iberian Peninsula, extended the cultivation of grape vines throughout the territory, especially in the Tarraconense (mostly in the current provinces of Tarragona and Barcelona). With the advent and rise of Christianity, in the third and fourth centuries A.D., wine gained even more prominence. Even with Visigoth rule (V to VIII centuries), wine was important and only with the advent of Islam did production slow down, and it can even be said to have receded greatly after forbidding wine consumption among the Muslims. Only in the northern counties of Catalonia, which were dominated by the Franks in the late VIII century, did the vines begin to be replanted, and from that moment it was to be the Catholic religious orders, and in particular the Benedictine monks at the beginning, Cistercians later and finally the Carthusians who were in charge of spreading the grape vines as territories were regained from the Muslim Taifa kingdoms.

In the case of Priorat, this renaissance of viticulture was on behalf of the Carthusian people, and especially those who created the monastery of Scala Dei, where the first large winery in the area was. Those Carthusians also gave their name to the area; the Priorat. This territory was dominated by the prior of the monastery (a type of vice-president of the monastery, after the abbot, the president and the most powerful). However, the story does not end there. For centuries, from the eleventh to the eighteenth century, the wine evolved little but was more similar to the young wine that we drink today (Greek and Roman wine was flavoured with herbs, honey, water…). The history of wine was also evolving, but with the advent of trade with America, things were changing; the wines of the Priorat and in many places in Catalonia were used to make spirits or to increase the ranking of Bordeaux wines (Priorat wines were known for their high graduation). Also at the end of the nineteenth century there was a great scourge throughout Europe; phylloxera (the fly of American origin that lays eggs on the roots of vines, and whose larvae kill the plant because by sucking its sap). After a hard struggle and thanks to the agricultural cooperatives created throughout Catalonia, the sector recovered around the dawn of the 20th century. But in the mid 20th century came another enemy of wine: contempt. New eating habits, mainly from the US, brought new drinks that young people consumed greatly: Coca-Cola, Fanta and beer. Priorat wine was in danger of death in the 60’s and 70’s. Despite this, some people believed in hte wine industry: some locals, others almost hippie gurus who came from other parts of Catalonia, Spain or the world, such as Réné Barbier, Álvaro Palacios, José Luis Pérez, Charlotte and Chrsitopher Cannan and Daphne Glorian. This is when the Priorat Renaissance arrived. This whole new movement started around 1989. First was Álvaro Palacios and René Barbier who opted for Gratallops, the epicentre of the new Priorat – like the old Scala Dei – buying grapes from other winemakers and introducing international or French varieties like Cabernet-Sauvignon, Merlot or Syrah. A bottle of the l’Ermita (by Alvaro Palacios) was sold for more than US$1,000 at Christie’s, the auction house in New York, and that was heaven for the Priorat. With ecological development it became increasingly aware to common consciousness that we needed to adapt to the land and not the other way around. That is why from the late 1990s and in the new millennium attempts have been made to incorporate and even rescue native varieties, and in the Priorat these are Grenache (garnatxa) and Carignan (samsó, or carinyena). Today, international varieties coexist with local ones and many excellent blends are made. The wine in Priorat is typically aged in French oak barrels for a year, or more, which was suggested by Alvaro Palacios and Réné Barbier, and it was this that made this wine raise the roof. The future will undoubtedly belong to the two aforementioned local varieties, those that give character and personality to the wines of the region, as well as the llicorella type soils (a mix of slate and quartz that dates to the Paleozoic era), the region’s slate. On the other hand, the future holds promise because it is in good hands. The winemakers work for the sake of the DOQ. There are many names and alot of love in this region: Salvador Burgos and Conxita Porta in Poboleda, Marco Abella and his wife, Olívia, a Porrera, August Célio in Gratallops …among others. There are many festivals to discover the area and we love to visit them, such as the Traditional Vintage Festival in Poboleda, usually held on the first or second Saturday of September. There, in addition to the harvest, the grapes are treaded and more than twenty wineries offer their wines until late.

Olive oil has followed a similar path … the Greeks introduced it and the Romans expanded it. It has had no serious interruptions as it is not a food barrier, on the contrary it is an integrating element. With the advent of Islam it even spreads more, especially in the south of Spain and of Catalonia; perhaps that is why four of the five DOP Oli (Demonination of Origin Protected Oil) for Catalan olive oil are in the south: Siurana, Les Garrigues, Terra Alta and Baix Ebre-Montsià; while in the north there is only the DOP Oli l’Empordà. In medieval times, in the traditionally Christian territories, pork butter was used instead of oil. However, as we said, the history of the olive tree in Spain and in the Priorat region (in the DO Siurana) has been calmer and more constant than with grapes. The traditional oil mills, with hydraulic or animal presses, have been replaced by machines that grade and make pasta with olives. There are three types of oils of a certain quality: extra virgin, virgin and olive oil and in the Priorat most of it is of the first category, which posesses all the organoleptic properties (aroma , taste …), acidity, sweetness, bitterness and spiciness characteristic of the region’s oil. The most common and well-known variety in Catalonia is arbequina (in the DOP Siurana it represents 90% of the total). We also have the rojal and morruda types in Siurana, and in the rest of Catalonia the corbella, the corivell, and the verdal (green) olive types. Towards November and December is when the oil festivals are celebrated all over Catalonia. We have been to La Bisbal de Falset Festival and we loved it. Be encouraged to visit it!

Cereals are not so present in Priorat; one must go to central Catalonia, specifically to Bages, but this will be in the following Blog! Thanks for following us and see you soon!